Lock it or lose it. That's the sad truth when you own a bike, particularly a commuter bike that might be locked up for hours in plain view in town, or in a thief-accessible bike store at work. With enough time and the right tools, any lock is breakable. The job of a lock is to make your bike too much trouble for a thief to steal. It's a deterrent.

How much deterrence you need depends on the value of your bike and the number of potential thieves who might come across it. It is recommend that you spend at least 10% of the value of your bike on security for it. Any lock is better than none, but unless you're only after an ultra-lightweight immobiliser for rural café stops, a lock that isn't rated at least Sold Secure Bronze will give you a false sense of security. A weak lock can be broken in seconds. Good security costs. It also weighs a lot…

Sold Secure is a not-for-profit UK company administered by the Master Locksmiths Association. It tests locks and rates them Bronze, Silver or Gold in ascending order of security. The locks should hold out for one, three and five minutes respectively against progressively more determined and tooled-up attacks. Some thieves will be able to break the locks in less time than this, but it's not a bad guide to quality. If you've got a gold-standard bike, you want a gold-standard lock.

When you're looking for good, portable security, the choice is between a D-shaped shackle lock, also known as a U-lock or a D-lock, or a heavyweight chain-and-padlock combination. In high crime areas, you might want both. That's because it tends to require different tools to break different types of lock. D-locks are lighter and more compact, while chains can be locked to street furniture that won't fit in a D-lock's shackle.

D-locks often have a bracket to fix the lock to your bike frame in transit, preventing you from rummaging in your bag. Chains can be carried looped over your neck and shoulder, like a sash. Avoid getting chain oil on your lock, especially if it will be carried next to clothing or loose in a bag with other gear. It may be practical to keep a lock at work, locked to its anchor point, so that you don't have to carry it in every day.

Lock your bike whenever you leave it, even if it's for less than a minute. Lock through the frame to a solid, immovable object, which the bike can't be lifted over the top of. Try to 'fill the lock' with bike and street furniture, as this will give a thief less room (and leverage) to attack it. Note that quick release parts such as wheels and the seatpost are easily stolen. Either replace the quick releases with allen bolts or security skewers or use an additional lock to secure them to the bike.

Keep a spare key separate from your day-to-day key. Lubricate the lock periodically to prevent it seizing. Squirt a bit of oil into any holes and work it in by repeatedly opening and closing the lock. If your lock freezes solid in winter, pour hot water over it and oil it afterwards.

For more information on getting the best lock for your chosen commuter bike contact one of Cyclescheme Ireland’s network of Partner Bike Stores.

Here's a selection of locks worth considering. 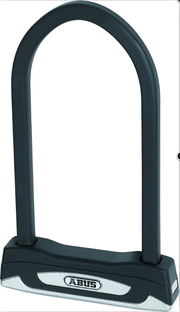 One of the best D-locks money can buy, the Granit X-Plus has a 13mm hardened steel shackle that's difficult to attack with pry bars and jacks due to its parabolic shape. A thief can't just cut one side of the shackle and rotate the lock body around the uncut side either; the square section bar prevents this. It's available with a choice of frame-mounting brackets for around €10 extra, or with a shorter (230mm) shackle for a bit less. Sold Secure Gold.
www.zyro.co.uk 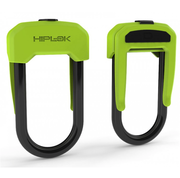 Hiplok got their name from their chain lock, which you carry by fastening it around your waist. Their new D-lock is also designed to be easy to carry. A broad clip on the body of the lock enables it to be attached to the belt of your trousers or a courier bag's shoulder strap. This accessibility makes it very useful for anyone making multiple stops around town. It comes in a range of colours. Sold Secure Silver.
www.hiplok.com 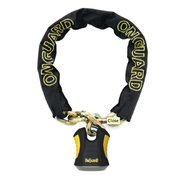 Like the Squire chain, this one is bike portable and could double as home security. It's made from 12mm hexagonal steel links reinforced with titanium. Both sides of the padlock shackle are locked down, so like the Abus Granit D-lock it can't be rotated around its own lock body.
www.todayscyclist.co.uk 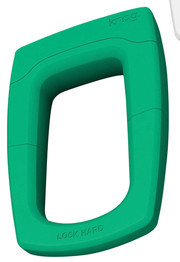 It's called the Bouncer because the 13mm hardened steel shackle is embedded in a thick layer of springy, UV-resistant silicone. The benefit isn't so much the distinctive looks but the fact that the lock won't scratch or chip or bike's frame by accident. It's Sold Secure Bronze, but Knog do a similar-styled Strongman lock for about €90.00 which is Sold Secure Gold.
www.todayscyclist.co.uk