Because it's inconvenient. Drivers use motorways – built just for them! - when it will make the journey more convenient. It's their choice. Cyclists have the same freedom when it comes to off-carriageway cycle tracks and on-road cycle lanes. When it helps our journey, we use them; we love well-designed cycle facilities. Sadly, some are poor. Cycle tracks may be badly surfaced or littered with broken glass. They may slow your journey, by taking circuitous routes, or forcing you to give way at every side road, or being packed with pedestrians. Cycle lanes are often too narrow and force you to ride where it's unsafe: in the gutter. 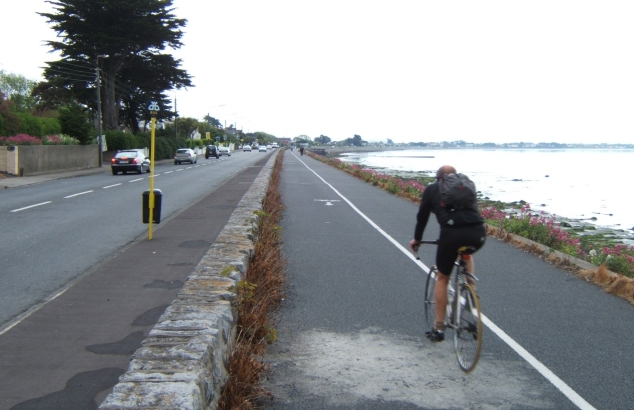 It might be because: a) it's a shared-used path; or b) the cyclist considers the road there unsafe. Shared-used paths aren't always obvious; sometimes there's nothing more than an occasional blue sign to indicate that it's intended for cyclists too. The safety issue is trickier. It is against the law, and any adult cyclist lacking the confidence to cycle on the road ought to get some cycle training. But no one expects young children to ride on the road. And if the choice is between, say, a busy dual carriageway or a quiet footpath alongside, many adults would choose the path. Police discretion is thus a useful tool when it comes to issuing Fixed Penalty Notices for pavement cycling.

Because it's less safe. Hugging the kerb invites drivers to squeeze past when there is insufficient room to do so. It risks you being boxed in or cut up by left-turning drivers when you want to go straight ahead or turn right. And being at the periphery makes you less visible to other road users, who focus on the middle of any given traffic lane where most of the action is. Good road positioning is self defence. It won't slow down the traffic because cyclists are traffic! It won't slow down drivers who overtake properly, as the Highway Code (Rule 163) tells drivers to give cyclists  'at least as much space as a car'.

Because cycling side-by-side is more sociable and isn't against the law. The Highway Code (Rule 66) says: 'never ride more than two abreast'. Given that two cyclists abreast take up less space than a car, it won't affect drivers who overtake in accordance with the Highway Code (see above); these drivers will already be on the other side of the road. A group of cyclists riding side by side can be easier to overtake than a long line in single file, as it will take half as long to pass them. That said, there are circumstances such as busy roads where it's courteous for cyclists to switch to single file.

Because filtering through traffic is legal and saves time. Advanced Stop Lines (ASLs) for cyclists are so common because highway engineers endorse filtering. Filtering lets cyclists get to the head of the queue, so that they can get through the junction before being overtaken. This reduces the risk of accidents. What cyclists are not allowed to do is wait in front of the stop line, so if there's no ASL you'll need to wait at least one vehicle back.

Because there's no such thing. Vehicle Excise Duty (VED) is an emissions tax. Band A cars that emit up to 100g/km of CO2 are exempt from Vehicle Excise Duty. Bicycles emit no CO2 so if VED were applied to bikes, the rate would be zero. In any case, VED is not ringfenced for road maintenance. Roads are paid for out of general and local taxation. If you pay tax, you pay for the roads. Tax evaders with offshore accounts and expensive cars are the real freeloaders.

7. …need a licence and a number plate?

Because a bicycle licence cost more money to implement than it would bring in in revenue, to no real effect. And because cyclists, like pedestrians, can be identified by their faces, unlike drivers who are hidden by their vehicles. Cycling training is excellent but at mandatory test would reduce cycling levels, particularly among children. Broadly speaking, you need a licence to do things that are potentially dangerous to others or involve going onto private property. So licences are required for cars, firearms, or fishing in someone's pond. They're not required for pedestrians or cyclists.

Because it's not a legal requirement, unlike the wearing of a motorcycle helmet. Many do anyway. That's the short answer. The long one opens a Pandora's box of exclamation-ridden claims, counter claims and accusations. Helmets do offer some head protection but you're approximately as likely to require such protection while driving, walking, or stepping out of the shower. Cycling organisations endorse the legal position: the right of the individual to choose to wear a helmet or not. 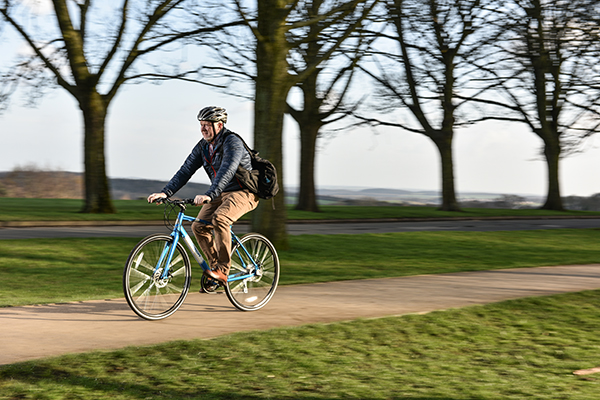 Because it's not a legal requirement. On a national level, uninsured cyclists are not a significant problem – unlike the million or so uninsured drivers. Like pedestrians, who are also not obliged to have insurance, cyclists have a limited capacity to cause harm. Many cyclists nevertheless do have third-party insurance, either via their home insurance policies or through membership of a cycling organisation. Given how much time you'll spend on your bike as a cycle commuter, third-party insurance is well worth having. Do look into it.

Because you've already got one? Because you don't want one for travelling 5KM to work? For short urban journeys, a bike is often quicker than a car. It's much cheaper. And it's healthier – for you and for everyone else, because you get daily exercise and you don't cause road deaths, air pollution, traffic jams, or noise pollution.