Many cyclists find right turns daunting, which is understandable given that motor traffic can be coming from both directions at multiple times your speed. The thing to remember is that you cannot get in the way of traffic: you are the traffic. If your road position is conspicuous, your intention unambiguous, and your manoeuvre predictable, drivers will treat you as traffic – and right turns will be straightforward.

Turning right is easier if you're already in the traffic stream, a metre or more out from the kerb. If you're in the gutter, drivers are liable to ignore you. If you're where they expect traffic to be, in the traffic lane rather than almost on the pavement, they will see you (not just look at you!) and react to you.

The following descriptions initially assume you're turning into a side road. 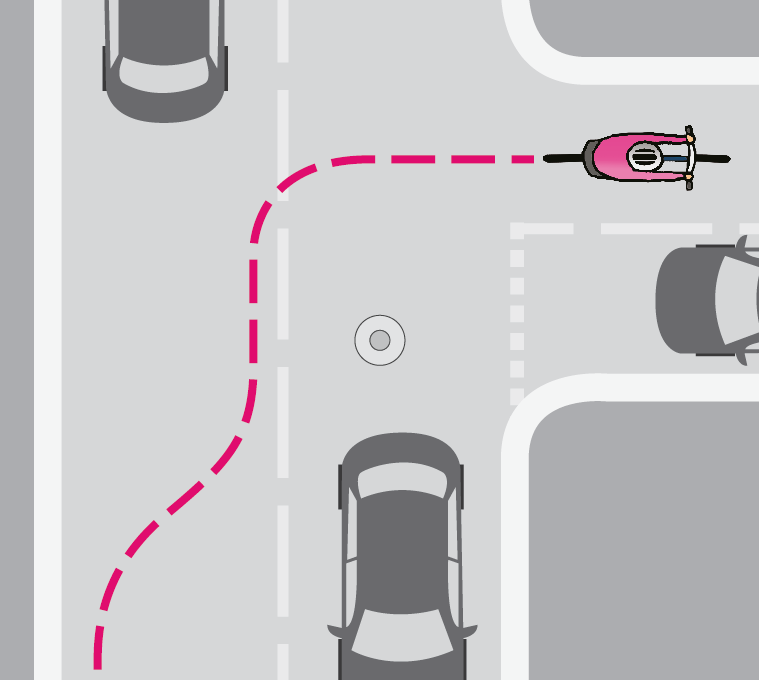 Look back early
Check over your shoulder for following traffic a good distance (50-100 metres) before your turn. You want to be able to ride diagonally towards the centre of the road rather than cutting sharply across it, and you may have to wait for a gap to open up in the traffic.

Check again, then signal
At about 50 metres from your turn, look behind again – itself an indicator to drivers that you're about to move out – and signal boldly, right arm straight out. If there's a gap, start to move out. Ride smoothly, aiming just to the left of the centreline. If there's no gap, get ready to negotiate.

Dealing with drivers
When you signal right, some drivers will ignore you, some will accelerate to get past you, and others will let you pull out. Look directly at the driver to gauge what they're doing. And listen: you can hear a car accelerate. At some point, a driver will leave a gap for you to slot into. They may even indicate this with a flash of the headlights. When you are sure it's safe to do so, move out.

Make the turn
Aim for the centre of the lane you want to be in on the side road. Don't cut the corner, as you may come into conflict with traffic wanting to leave the side road. Don't go too far left or you may get squeezed into the gutter by traffic making the same turn as you.

Boxed in?
Maybe the drivers behind wouldn't give you an inch. Maybe you realised too late where the turn was. Don't worry. One of the joys of being on a bike is the ability to hit the reset button. Signal left, pull over to the side of the road and dismount. Cross the road as a pedestrian, pushing your bike, wherever it is safest to do so.

Exiting a side road
Take your lane as you approach the junction. You're aiming for the centre of your lane this time, not the middle of the road. This dissuades drivers from squeezing alongside you and 'undertaking' you. Be ready to stop at the junction, shifting down into a gear you can accelerate in. If there are traffic lights, there may be an advanced stop line for cyclists. If you can reach this green box safely, do so. If not, take your lane so that you are in the queue with the cars. Don't filter up the left of a lorry or long vehicle to reach the front of a traffic queue.

Multiple lanes
If you have to turn right across multiple lanes, move over one lane at a time. Signal and move to the right of the lane you're in. Then do the same into the next lane. Right turning traffic will be slowing down to make the turn, but be alert for traffic going straight on in your original lane.

How to: Keep cycling to work in the winter

It’s colder, darker, and wetter, but cycling to work can still be the highlight of your day if you have the right equipment and attitude.

How to: Join Cyclescheme Ireland's Love to Ride Community

Spread the cycling message by logging your journeys and encouraging colleagues and friends to ride. There are prizes – and prestige – to be won.