Whenever commuter challenges are staged and a car driver and cyclist are timed over an urban journey, the cyclist invariably wins. Bikes are faster than cars around congested cities. Cars have a higher maximum speed, but cyclists spend much less time stopped dead so their average speed is higher. Efficiency is all about average speed. The secret is not to go fast but to avoid going too slow: the difference between 40kph and 50kph is negligible in town; the difference between 15kph and 0kph is massive. This principle applies just as much to your own journeys if you want to save time on the way to work. Forget your top speed, just keep moving as best you can.

The route choice with the fewest traffic lights and the fewest give-way junctions is most likely quickest. Nothing dents your average speed like standing still. If you normally cycle at 25kph, a single minute spent waiting at traffic lights is time that you could have used to travel another quarter of a mile. That's why backstreets can be quicker even when you're riding further. Some backstreets become rat-runs for drivers, but you'll still encounter less traffic than on the main road alternative. Councils generally do their best to restrict motor traffic on rat-runs too, installing speed humps, lower speed limits, one-way travel, and bollards to block off streets. Some measures are expressly designed to restrict motor vehicles but still allow cycling access – great! At other times, a broken link in an otherwise ideal backstreet cycling route can be re-joined by hopping off your bike and pushing it for a few yards. Number of junctions is why cycle tracks running alongside roads are generally slower than the road (although they have other advantages). They cede priority at every side road. Cycle tracks following old railway lines are often faster, however, since they tend to go over and under roads, avoiding junctions. 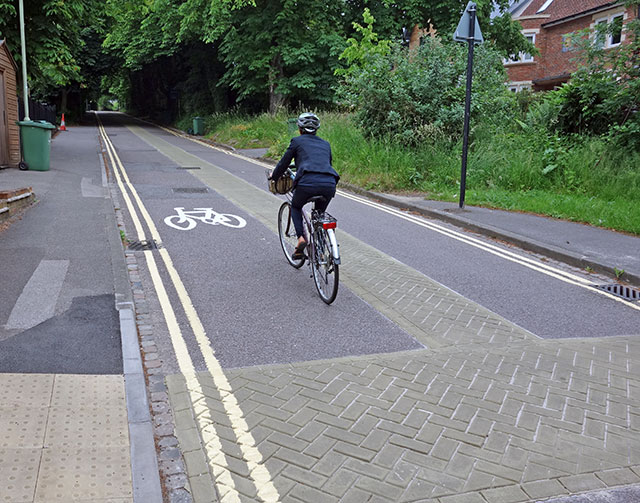 Hills obviously slow you down on a bike. You might think you'd recoup the time by going faster down the other side. You don't. Let's say there's a hill on your way to work that's one mile up and one mile down, and that you climb at half your normal speed and descend at twice your normal speed. At 25kph, 1 mile would take you 4 minutes. At 12.5kph, 1 mile takes 8 minutes; at 50kph, 2 minutes. So going over the hill would take 10 minutes, 2 minutes longer than riding 2 miles on the flat. The flat route would take the same time as the hilly one even if it were 25% longer.

Accelerating quickly and braking hard wastes energy. Ride smooth. Instead of trying to maintain a certain speed, try to keep moving, period. When you're approaching a roundabout, for example, watch the traffic and aim to time your arrival so you don't have to give way. You'll need to be ready to stop, but by accelerating or slowing down a little, you may not need to. The same applies to other junctions. Look ahead, read the traffic, and plan where you need to be. That often means taking your lane, so that other traffic can't box you in. A bike's relatively slow speed is a huge advantage when it comes to anticipating the road ahead. You have more time to assess the situation and your stopping distance is short. With practice, you'll soon be gliding along, for the most part using your brakes only lightly – when you need to use them at all. 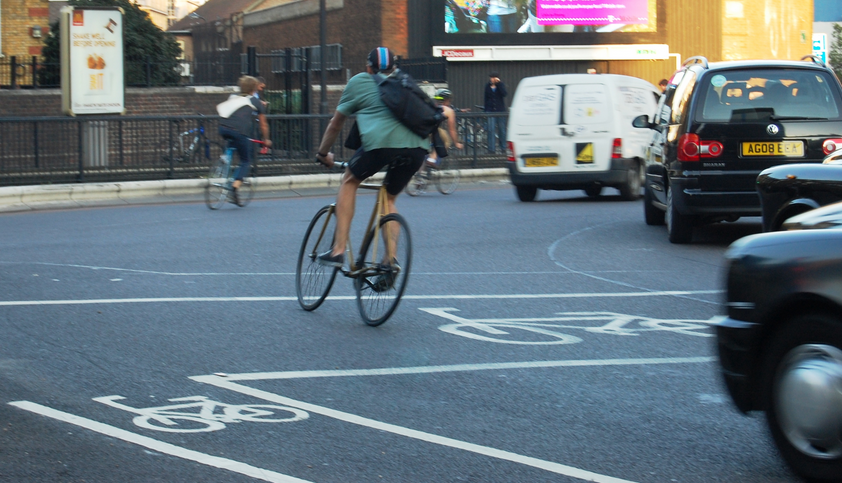 The ability to ride carefully past queues of stationary or slow-moving traffic is another reason why bikes are quicker around town. It's legal. You do need to be alert, and you need to communicate your intentions clearly to drivers, since you'll be leaving and re-joining the traffic stream. It's usually best to overtake on the right. Drivers can see you more easily in their mirrors, and it's where they expect to be overtaken. Never, ever overtake a long-vehicle like a lorry or a bus on the left. You'll be in the driver's blind spot if the vehicle turns left. You can overtake stationary lines of cars on the left, perhaps to get into an advanced stop line 'cycle box' at traffic lights, but use common sense and caution. Don't dive into narrow gaps between kerb and cars. Leave yourself room to manoeuvre. It may be better to overtake on the right – or simply to wait.