Two thirds of serious cycling incidents occur at junctions, most frequently at T-junctions. Typically, the motorist emerges into or turns across the path of the cyclist. 'Failed to look properly' is the primary reason, and it's more often the motorist that's at fault. Don't be alarmed by this; collisions are thankfully rare. Let it serve instead as a powerful reminder that just because you've got the right of way, there's no guarantee that another road user entering or leaving a side road will respect that. Treat those give way lines like warning markers

Good observational skills give you more time to react. When you see a side road, assess the traffic situation. Can you see into the side road? If you can't, any motorists approaching the junction cannot see you either. They may edge into the carriageway to get a better view…

Car indicators are just that: an indication of where the motorist might go next. Don't depend on them. Road position and speed give an idea of what the motorist is actually doing. You can assess some of this by sound: the noise of braking or acceleration behind you suggests where that vehicle will be next. Be sure to look around well in advance of the side road as well. You need to know how much room you've got for manoeuvre so you can move further out into your lane. 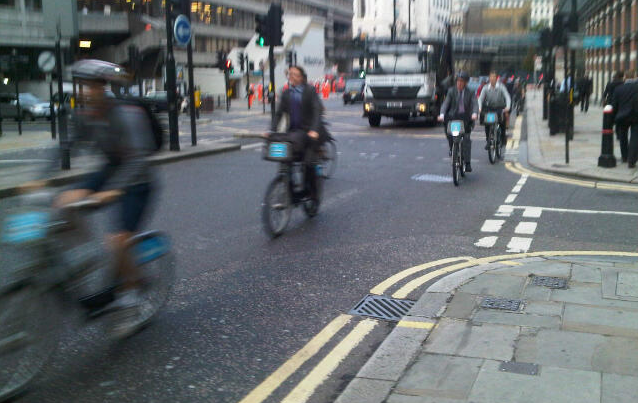 Good road positioning will mean that you're not in the gutter; you'll be perhaps a metre out from the edge instead. But you may want to move further out still and take the lane. Why?

Only move out when you know what's behind, signalling to show you're changing position if traffic is close behind you. If you move out gradually, like you do when you're passing a parked car, signalling is often not necessary.

Your road position has a big impact on your visibility. So does the position of other traffic. You can be partially or completely hidden by motor vehicles, from the point of view of traffic entering or leaving a side road. Take particular care when you're overtaking a line of stationary traffic. Considerate motorists will leave a gap at a side road. Motorists emerging from or turning into the side road may not hesitate before driving across this gap, being keen to get across the traffic queue while there's an opportunity to do so. They will not be looking for you, even though you have right of way. Be warned.

Lights are essential at night. A good front light will throw some light out sideways as well as forwards. This makes you more visible to traffic waiting to emerge from side roads. Reflective clothing is useful too, as it brighter coloured clothing during the day.

The more time and room you've got to take evasive action, the easier it is. That's why it's so important to be aware of the traffic environment and to position yourself best within it.

When you see a motorist start to encroach across your path, whether to enter or leave a side road, try to eyeball them. Don't bother ringing a bell. They won't hear it and you need to be ready on the brakes. Shout 'stop!' instead. Really shout! If that doesn't stop them in their tracks, you'll need to make a snap decision: swerve or emergency stop. If the motorist is right there, it's unlikely that you'll be able to stop quickly enough; swerving, sometimes in combination with more gradual braking, is often safer.

If you find yourself being left-hooked by a left-turning motorist, you may have no option but to go left too. If so, bank the bike hard over so that you go through the turn tighter – and hopefully faster – than the motorist. Be aware that vehicles cut in across the apex of the bend as they turn. Long vehicles do so dramatically and dangerously. If you find yourself being overtaken by a left-turning long vehicle, just get out of the way – even if that means getting up on the pavement (with or without the bike). Your safety is paramount. Remember: good road positioning should prevent this situation from ever occurring.